We had two amazing weeks at Gaudeamus Muziekweek 2019 in Utrecht as ensemble in residence there! We worked with Gaudeamus Award nominees Nicholas Morrish, Scott Rubin and Stefan Maier, as well as Jacques Zafra from Ulysses Network, presenting/premiering their works at the amazing spaces of Nikolaikerk and at Theater Kikker! During the opening of the festival at the foyer of Tivoli we had the opportunity to premier a collaborative composition of Nikos Kokolakis, Yael Levy, Sascha Thiele and the musicians of Catchpenny Ensemble reflecting Mariska De Groot’s installation Klein Woestijn – a project that was developed through Stichting de Vrolijkheid with the help of the residents of azc Rijswijk at the Vrolijk Museum Rijswijk, where Mariska was artist in residence the past summer. During the last day of Gaudeamus Muziekweek 2019 and together with a piece by Theodore Shin Kim, Catchpenny Ensemble performed Light Trace, a collaborative project with Nikos Kokolakis, Yael Levy, Sascha Thiele, Tivon Rice as well as Thrainn Hjalmarsson and Bergrún Snæbjörnsdóttir for which we worked in several phases for the past year.

Thanks to Co Broerse, Anna van Kooij, Sofia Lee and Allard Willemse for the beautiful pictures.

Also thanks to Gaudeamus team for the amazing organization! Martijn, Matthijs, Camille, Ingrid, Benjamin, Laura and the ones we didn’t meet and the head technician Elizabet van der Kooij who made everything easier, as well as Ruud, Arthur, Thomas, Sam, Gijs and Stef. And not to forget the volunteers for the delicious food all these days!

Catchpenny Ensemble, together with guest composers and visual artists, aims to approach these questions by creating an interdisciplinary work which explores the performance space with an interactive, image based score. 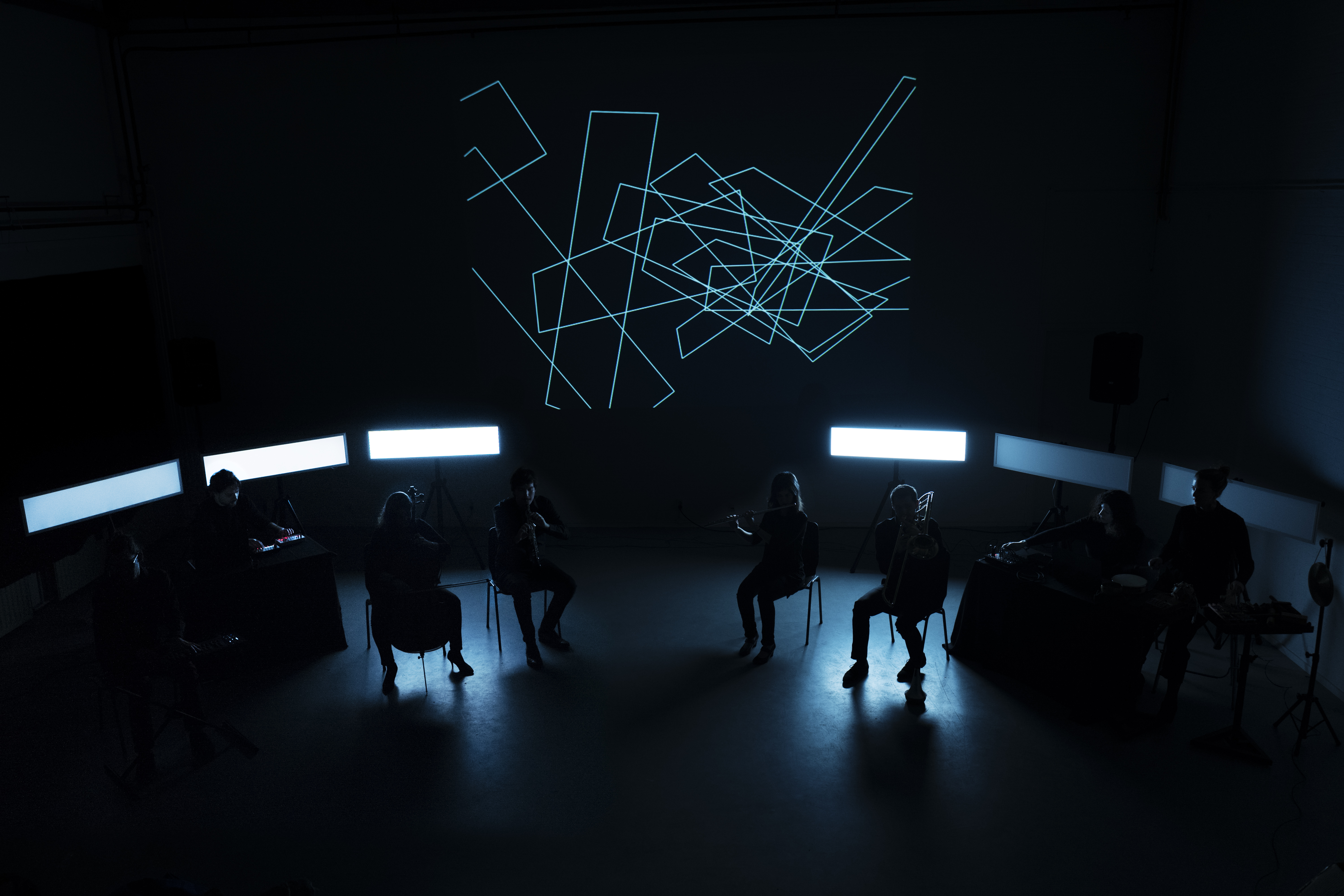 We are honored and excited to be one of the ensembles in residence in Gaudeamus Muziekweek 2019. We will premiere some new works written for our ensemble at 4 – 8 of September 2019. Looking forward!

Fascinated by the amazing cinematic world of Georges Méliès, Catchpenny Ensemble creates an audiovisual experience of conventional and non-conventional projections, lights and shadows, acoustic and electronic sounds, inviting the audience in this unique reality.

Special thanks to Amir Vodka – Berendsen and DNR.

Catchpenny Ensemble is very happy to present their new audiovisual concert / installation program Mindspace during Hoogtij at Het Nutshuis on December 1, 2017. The performance starts at 21:00! The We Are All Human Rights Defenders # 2 exhibition “Shrinking Space” is open from 19:00.

Special thanks to Mirjam Zweers and Het Nutshuis!

Catchpenny Ensemble is very excited to be collaborating with composition students of our alma mater, the Koninklijk Conservatorium, in Decomposing Raaijmakers – a new instrumental audio-visual work inspired by Raaijmaakers’s analytical and strictly-generated music. The work will premiere on April 4, 2017 at Korzo Theater in The Hague.

With Decomposing Raaijmakers we celebrate 50 years of the Spring Festival in The Royal Conservatory. Dick Raaijmakers was a formative composer of the “Hague School” through  the contributions of his diverse output. In the late 1960s, he began a marathon series of concerts during which contemporary music was performed, and thus became the beginning of the Koninklijk Conservatorium’s Spring Festival.

Inspired by his analytical and strictly generated music, we collaborated in Decomposing Raaijmakers creating an instrumental audio-visual piece.

The main structure of the piece is a canon of musical material inspired by some of Raaijmakers works interpreted by the collaborating composers.

For the realization of this project, we – Catchpenny Ensemble – were very happy to collaborate with four Composition students of the Royal Conservatory: Sara Zamboni, Jimena Maldonado, Alex Kordzaia and James Alexandropoulos-McEwan.

Catchpenny was very honored to recently participate in the Festival Dag in de Branding, performing new arrangements of music by Thrainn Hjalmarsson and Missy Mazzoli.

Both nights of our performances on the festival were reviewed, including our performance of Hjalmarsson’s Sculpture #3 praised as a “fascinating experience with musicians and audience alike watching the video spellbound.”

Beyond excited to be performing at the upcoming Festival Dag in de Branding! We’ll be performing Dec. 2 + 3, featuring music by Thrainn Hjalmarsson and Missy Mazzoli, more info and tickets here.

Catchpenny composer Nikos Kokolakis was recently interviewed by Radio Romania on our recent performance at the Romania.2 Film and Music Festival, focusing on the work of Romanian sculptor Constantin Brâncuși. Listen to the full interview (along with excerpts from the performance) here.

Photos from our recent performance at Spotlight: Romania.2 Film and Music Festival, Nov. 8 at De Nieuwe Regentes in Den Haag:

Catchpenny is super honored to be featured photographically in a New York Times article on the recent Holland Festival! Read the full article here.

Catchpenny is excited to be performing at the upcoming Holland Festival, on June 9 at the Rijksmuseum Passage. The lunchtime concert, titled “Vice Verses,” features works by Austrian composer Olga Neuwirth, with the seven deadly sins are the starting point for a new composition of seven students (led by Yannis Kyriakides) of the Royal Conservatoire.

Den Haag Sounds of Silence Festival coming up! We’re thrilled to be apart of this year’s silent film & live music festival in Den Haag, presenting a brand new collaboration between all the Catchpenny composers to the 1913 French serial film Fantômas. The show will take place on February 6, 17:00 at De Nieuwe Regentes. More info and tickets here.